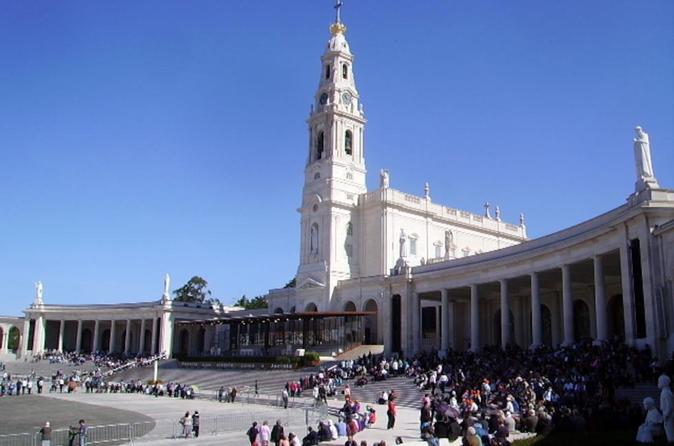 Pick  up at the Hotel at 09am to Fatima
Arrival at 10.15h
Time to visit and attend mass
departure time 12h
Driver /Guide with private car

With its origins deep in history, it was during the Arabian occupation that this settlement developed and was named. According to legend, during the Christian Reconquest, the Templar knight Gonçalo Hermingues, also known as Bringer-of-Moors, fell in love with Fátima, a Moor captured in the course of an ambush. Reciprocating the love, the young woman converted to Christianity and adopted the name Oureana.

In the sixteenth century, the settlement became a parish in the collegiate church of Ourém within the Diocese of Leiria.

Its subsequent development dates from the events known as the Apparitions of Fátima, in the early part of the twentieth century. It has become one of the key centers for the Cult of the Virgin Mary in Portugal and has been recognised world-wide by the Catholic Church.

The first apparition took place in 1917, in Cova da Iria, at the site of the current Sanctuary. The most important celebrations are held on 13th May (including the Candlelit Procession on the night of the 12th and the Farewell Procession closing the event on the 13th) and 13th October. Furthermore, the 13th of every month between these two dates is also a day of devotion.

For those interested in the historical context of the apparitions of Our Lady of Fátima, visits can be made to the houses of the shepherd witnesses in the village of Aljustrel.

In the gardens of Casa de Lúcia, there is a monument commemorating the second apparition of the Angel of Peace and the end of the Via Sacra which begins in the Sanctuary. Along this route, there are 14 chapels donated by Hungarian Catholic refugees in the West. Of particular note is Valinhos, 400 metres from the village where monuments commemorate the fourth apparition in 1917 as well as the place chosen by the angel. Here, in 1916, the shepherds saw the Angel of Peace for the first and third times.

Pick  up at the Hotel at 09am to Fatima
Arrival at 10.15h
Time to visit and attend mass
departure time 12h
Driver /Guide with private car